Happy New Year! Welcome to Paper Cat Press’s Weekly Roundup! In the Weekly Roundup, I provide links and summarized information about the crowdfunded projects, creator opportunities, and resources that have caught my eye over the week. I hope you enjoy!

Did your comic debut in 2017? Fill out this form! I’ll be sharing the full list on January 15, so be sure to submit your comic before then!

Need to contact your government officials? Let Resist Bot and 5calls help you out.

If you are a trans person in need of legal assistance, check translawhelp.org for pro bono services in your state.

Here’s a list of free or low-cost mental health resources. Thank you so much for compiling this list, Tiffany!

If you need to talk to someone or otherwise vent, please utilize this list of help hotlines.

Take care and take your time. Your work is more important than ever. Thank you for sharing your originality and openness with the world. You bring light to the days of others, and it is so, so appreciated.

The Laydeez Do Comics Women’s Prize for Unpublished Graphic Novels in Progress is accepting submissions from UK female-identifying comic artists until January 13, 2018. The selected winner will receive £2,000, and five runner-ups will receive £200 and a one-on-one critique session with an acclaimed graphic novelist. Submit 12 pages of a comic project for consideration.

The Comic Studies Society is accepting nominations in a number of categories through February 1. Recipients of the CSS Article Prize, CSS Book Prize, Gilbert Seldes Prize for Public Scholarship, and/or The Hillary Chute Award for Best Graduate Student Conference Presentation will receive $300, a plaque, and an invitation to a roundtable discussion of research.

The DiNKy Awards are now accepting submissions from creators.

The winners of StArt Faire’s 2017 Excellence in Webcomics Awards were announced! Congratulations to all of the winners! There’s still time to vote for the People’s Choice Award. Submit your favorite webcomic before January 19.

Did your comic debut in 2017? Fill out this form! I’ll be sharing the full list on January 15, so be sure to submit your comic before then!

The Black Magic Zine is running a crowdfunding campaign on IndieGogo to raise funds for production, fulfillment, and donation to the United Way of Genesee County’s Flint Water Fund. Over 35 black women and nonbinary artists contributed illustrations and comics of black women in the fantasy genre. Tier options include digital and physical versions of the zine, stickers, prints, and an enamel pin. The campaign ends on January 9, 2018. 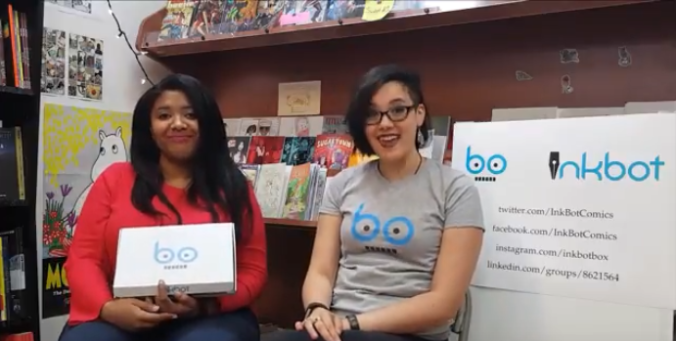 InkBot is running a crowdfunding campaign through IndieGoGo to launch their upcoming indie comic monthly subscription service. InkBot finds the best of the small press independent comic scene and ships those books to readers who may have never otherwise discovered the work. Tier options include low-cost subscription rates at 1-, 3-, and 6-month tiers, stickers, and a lifetime membership for $1000. This crowdfunding campaign ends on January 12, 2018.

Comic creator K. Lynn Smith is running a Kickstarter campaign to raise funds for the production of Plume: The Omnibus. The book collects all 4 volumes – 480 pages – of the hit webcomic series in full-colored soft- and hardcover formats. Tier options include digital and physical copies of the book in soft- or hardcover, t-shirts, enamel pins, prints, commissions, and more. The Kickstarter ends on January 12.

Bear Company: A Comic Anthology About Big Gay Men is running a Kickstarter campaign to raise funds for its printing and shipping. Bear Company will feature 4 stories about fat gay men, transgender men, and nonbinary people in 48 black and white pages. Tier options include digital and physical versions of the comic. The Kickstarter ends on January 17.

Sparkler Monthly is running a Kickstarter for Sunshine Boy: Volume 1 Paperback by Moosopp. Sunshine Boy follows Kelly who, after a move to a new place, finds a friend in his next door neighbor, Grey. Tier options include physical and digital copies of the book, a desktop background, keychains, and stickers. The Kickstarter ends on January 23. 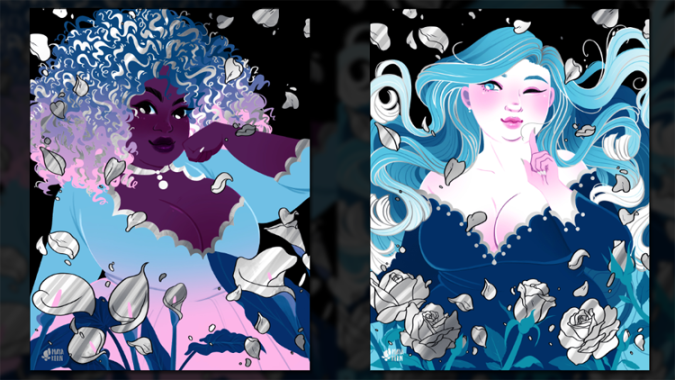 Maya Kern is running a Kickstarter to produce Flower Girls Art Prints for Kickstarter’s January “Make 100” campaign. Each print will be silver foiled and hand-numbered, limited to quantities of 75 each. Tier options include digital wallpapers and the prints themselves. The Kickstarter ends on January 31.

Did you or will you table in an artist alley in the US this year? Take the 2017 Artist Alley Convention Survey here.

Format shared this article about major publications and their rates for illustrators. Submit your experiences to expand what we know about rates!

If you’re an artist who uses the internet to further your career, fill out this survey!

Are you a comic critic or journalist? Take this survey!

You can find a directory of currently open animation jobs at animatedjobs.com!

Check out Arts for LA, College Art Opportunities, or Graphic Competitions for more exhibition, residency, and grant opportunities. See Find Anthologies for a list of anthologies with open submissions and to submit anthologies of your own. Chris Arrant regularly shares location-based jobs in comics (mostly editorial, office, or design work). Check the #ComicJobs hashtag! Check Comic Ops to see opportunities specifically for comic creators. Zine Submissions and Zine Scene have great lists of zines, too!

Con or Bust has free tickets available for people of color for a number of upcoming conventions, including the SFWA Nebua Conference, the Locus Awards weekend, and WorldCon 76!

Conosaurus is LIVE! Browse cons by location, date, and other variables! Check it out and support their Patreon! Here’s their Weekly Digest #40! Need convention advice? Join #ConTalkTues every Tuesday at 8PM EST!

Geeks of Color is looking for a graphic designer.

I created a document where people who have skills in web design and are willing and able to assist comic creators in creating their own websites can list themselves. Feel free to add your name, examples, and prices!

Looking for more fan zines to submit to? Check out Find Anthologies and ZineAppCalls for more! Have a finished zine project you want to advertise? Check out Zine RTer!

The Editor – Writer Mentorship for Diverse Writers is accepting applications from unpublished, underrepresented writers through January 21.

The Representation Matters Mentorship Program is accepting applications on a rolling basis from self-identified people of color interested in the publishing industry. Mentorships will last 6 months, with a minimum of one session every two months.

(Seattle, WA) Densho is seeking a digital media artist in residence to explore the history of incarceration in World War II and how it impacts contemporary injustices. Applications are due January 31.

Natalie “Tally” Nourigat offers advice & resources for young cartoonists ages 14-18 (although this is good advice for creators at any age)!

If you enjoy the Weekly Roundup, please consider supporting me through my Paypal or Ko-Fi. Thank you to E. Ross Ura and AnitaComics for your tips! And thank you to Patrons A.D. Birch, Abdiwak, Alakotila, Amber, Ash, Becca, Candace, Elaine, Emm, Heidi, Jasmine, KaiJu, Kiwi, Kristina, Nika, Sam, and the.evergreen.burrow for your support!