A2CAF is accepting nominations for its Kids’ Comics Awards until April 1.

You can vote for the Locus Awards until April 15.

The Ladies of Horror Fiction Awards is accepting submissions of works of horror created by women (cis or trans) until December 31. The awards will be announced in 2020.

The Common Bonds Anthology is currently raising funds on Kickstarter to produce its upcoming anthology. The book collects speculative short stories and poetry featuring aromantic characters, and even has submissions open now. Tier options include digital and physical copies of the book, a postcard, and additional ebooks from the four editors. The Kickstarter ends on March 31.

POMEgranate Magazine is currently raising funds on Kickstarter to produce Eternal Witchcraft – A Comics Spellbook. The comics anthology features over 21 contributors and over 200 pages of instructional witchy comics. Tier options include digital and physical copies of the book, a mobile background and POMEgranate Magazine’s previous comic anthology Group Chat. The Kickstarter ends on March 31.

Kwanza Osajyefo of Black Mask Studios is currently raising funds on Kickstarter to produce WHITE, the sequel to critically acclaimed series BLACK. The series follows Kareem Jenkins, now known as X, as he serves as a symbolic leader in the resistance against President Theodore Mann. The series asks: how does a nation struggling with racial inequality cope in a world where only black people have superpowers? Tier options include a subscription to blacksuperpower.com and unlimited access to the WHITE comic, single issues with retail and variant covers, the paperback graphic novel, the graphic novel BLACK, and more. The Kickstarter ends on March 31.

Game studio Perfect Garbage is currently raising funds on Kickstarter to produce Love Shore: A Queer Visual Sci-Fi Novel. In a future where infertility has led to the growth of cyborgs as a vehicle for human survival, the protagonists must answer questions of identity while also dealing with drama and violence. Love Shore features two playable protagonists, four romanceable options (each with their own storylines), and an entirely LGBT+ cast. Tier options include the game itself, the game soundtrack, an art book, a post card, a t-shirt, a personalized sprite, and more. The Kickstarter ends on April 3.

Lisa LaRose is currently raising funds on Kickstarter to publish Rise of the White Phoenix: Book 1. This first book follows Luisa, a young girl who wants to be a luchadora, and includes 52 full-color comic pages. Tier options include the book, stickers, a keychain, a print, and a hand-drawn sketch by Lisa. The Kickstarter ends on April 4. 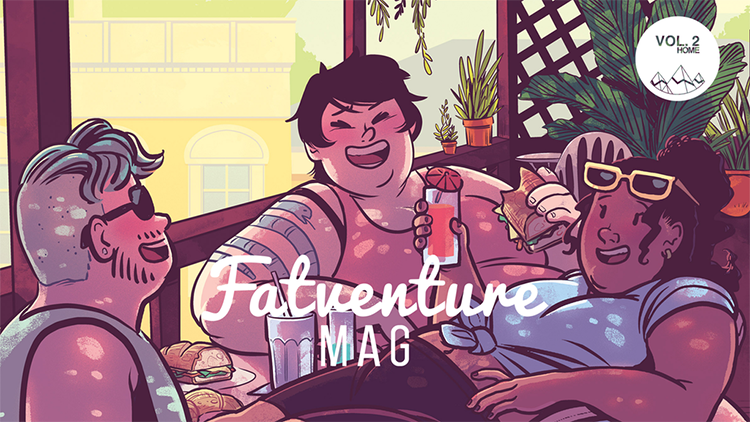 Fatventure Mag is currently raising funds on Kickstarter to produce its second volume. Continuing its mission of “focusing on active lifestyles beyond the boundaries of weight-loss culture,” Fatventure Mag Volume 2 features writers and artists whose work features the theme of “home.” Tier options include digital and physical copies of Fatventure Volume 2, a physical copy of Fatventure Volume 1, stickers, patches, an enamel pin, and ad space. The Kickstarter ends on April 7.

Haunted Cosmos is currently running a relaunch campaign to fund Strange Waters: A Queer Fantasy Comic Anthology. The anthology will feature about 160 pages of black and white queer, water-themed comics by queer contributors. Tier options include physical and digital copies of the book, stickers, postcards, a bookplate, postcards, and commissions. The Kickstarter ends on April 14. (Disclosure: I am a contributor to this anthology.)

Little Red Bird Press is currently raising funds on Kickstarter to publish three new comics collections in 2019. The three comics, one each by Gerardo Alba, Zak Kinswella, and Ally Shwed, will be less than 60 pages each and collected into individual softcover volumes. Tier options include digital and physical copies of each of the books, prints, patches, original artwork, and other Little Red Bird Press books. The Kickstarter ends on April 17.

The Comics Studies Society is accepting nominations for Executive Board positions.

JiMi Agency’s next group order will open on April 2.

Sakura-Con is hiring Japanese-speaking Guest Relations to assist their Japanese guests of honor.

The Latinx Collective shared a directory of Latina and Latinx small business owners and collectives. Check it out!

Did you or will you table in an artist alley in the US in 2019? Take the 2019 Artist Alley Convention Survey here. The results of the 2018 survey are available here.

Check out Arts for LA, Call for Entry, College Art Opportunities, Graphic Competitions, or Hey, Art Friends for more exhibition, residency, and grant opportunities. See Find Anthologies for a list of anthologies with open submissions and to submit anthologies of your own. Check Chris Arrant’s #ComicJobs hashtag on Twitter. Check Comic Ops to see opportunities specifically for comic creators.

Con or Bust has free tickets available for people of color for a number of upcoming conventions, including NorWesCon, the Locus Awards weekend, the Nebula Conference, and more.

Looking for more fan zines to submit to? Check out this spreadsheet created by magicalzombie for more! Have a finished zine project you want to advertise? Check out Zine RTer!

If you enjoy the Weekly Roundup, please consider supporting me through my Paypal or Ko-Fi.